Recent progress in nanotechnology has led to the development of spin-torque nano-oscillators (STNO), whose time constants, due to their nano-scale size, are naturally of the order of 1-100 nanoseconds. At SPINTEC we demonstrated experimentally for the first time that the use of such STNOs in swept-tuned microwave spectrum analyzers leads to a substantial reduction of the characteristic sweeping times, opening the path to develop spectrum analyzers (SA) with high temporal resolution. 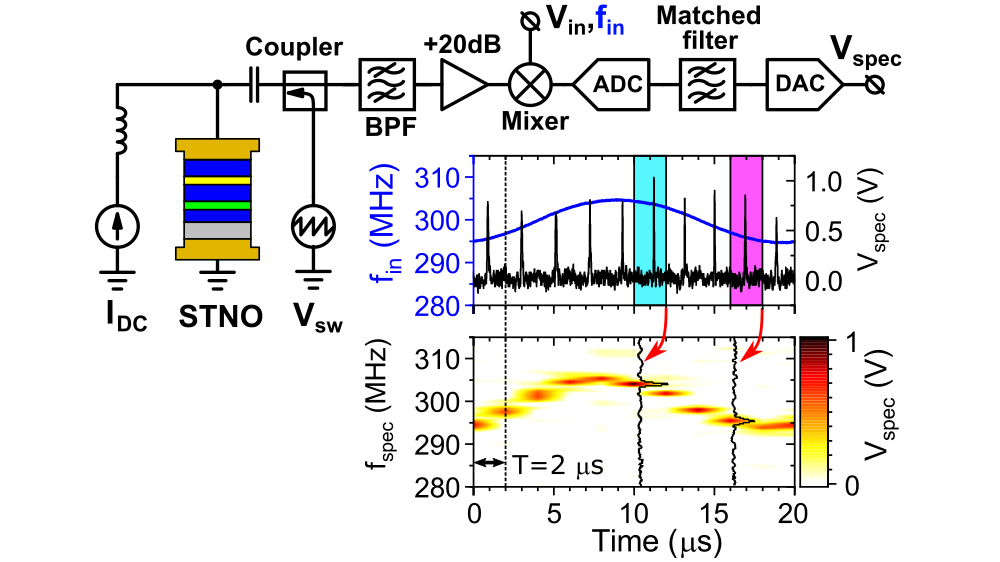 Principle of the ultra-fast spectrum analyzer (SA) based on STNOs. For the developed SA a matched filter is used to compress the chirp signal from the mixer into a single peak. Results are demonstrated for a vortex-state STNO tracking the sinusoidal variation of the frequency of an unknown signal.

In our digital world and with the rapid development of IoT and wearable electronics, the amount of wirelessly transmitted data is constantly growing. This dictates high data rates and complex transmission protocols. The research in the field of modern communication technologies thus requires measurement tools capable of fast spectral analysis, such as spectrum analyzers whose local oscillator frequency can be swept rapidly in the desired frequency interval. However, conventional voltage controlled oscillators (VCOs) have a low tuning bandwidth meaning that the corresponding sweep rates are limited to 1-10 MHz due to parasitic parameters arising from the macroscopic dimensions of the used components. In contrast to this, the frequency of spin-torque nano-oscillators (STNOs) can be swept on timescales of 1-100ns via a time varying input signal, as shown on the figure. This is possible due to their nanoscale dimensions. STNOs can thus be used as a reference frequency-swept oscillator in swept-tuned spectrum analyzers.

At SPINTEC we developed such an STNO-SA system and demonstrated its operational principle using vortex-state STNOs that generate signals in a bandwidth of 40 MHz around a carrier frequency of 300MHz achieving sweeping rates of up to 1.5MHz. The ultimate demonstration of very high sweep rates of up to 50MHz was achieved using uniform-state STNOs that generate signals in a much wider band of 1GHz around 9GHz. In both cases, the obtained frequency resolution at highest sweep rates is very close to the resolution defined through the “bandwidth” theorem. We also demonstrated that it is possible to resolve several frequency components simultaneously and to track fast frequency changes (see figure). This makes STNO-based ultra-fast spectrum analyzers a very promising technology despite their relatively high intrinsic phase noise and opens a new field of applications for STNOs. We expect that these ultrafast STNO-based spectrum analyzers with nanosecond temporal resolution will become in the near future practical and highly competitive microwave signal processing devices that will considerably impact modern radar and communication technologies.
The uniform-state STNOs were deposited and nanofabricated at the technological platform PTA and the vortex-state STNOs were provided via a collaboration with INL, Braga (Portugal).