The intense recent research on skyrmions has focused on multilayers of classical magnetic materials (Co, CoFeB, Fe…). In this work, the authors explore skyrmions in van der Waals bi-dimensional magnets, a new type of magnetic material in the broad family of 2D materials. Using ab initio and Monte Carlo calculations, they demonstrate that skyrmions should exist in the so-called Janus transition metal dichalcogenides.

The magnetic skyrmions are topological quasiparticles that can be created, displaced and detected with electrical currents. They are promising for many types of applications such as memory and logic devices. Significant research efforts on skyrmions has so far focused on multilayers comprising interfaces of heavy metals (or oxides) with classical magnetic materials such as Co, CoFeB or Fe. However, skyrmions in such metallic multilayers have still important drawbacks for their use in practical devices. This collaborative work between SPINTEC (UGA, CNRS, CEA), Unité Mixte de Physique (CNRS, Thales) and colleagues at NIMTE & CAS in China demonstrates that skyrmions may exist in transition metal dichalcogenides (TMD) of the Janus type (i.e. MnSeTe and MnSTe), a new class of 2D magnets in the large family of bi-dimensional materials such as graphene. Furthermore, the temperature and magnetic field range for observation of skyrmions are also predicted as a guide for experimental exploration. 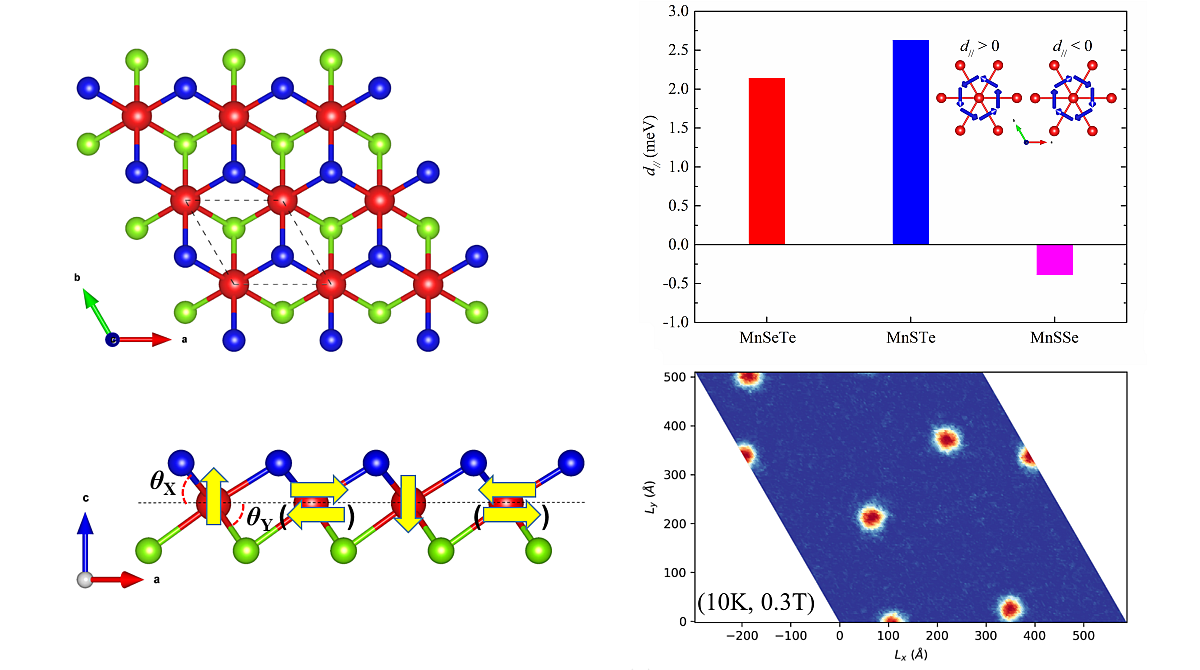 The left panel shows the top and side views of the crystal structure for MnXY (X,Y=S, Se, Te, X≠Y) Janus monolayers. The upper right panel presents the calculated in-plane DMI parameters d// in MnSeTe, MnSeTe and MnSSe structures. The bottom right panel shows a typical image of the disordered assembly of skyrmions in case of MnSeTe Janus monolayer.

Using first-principles calculations it was shown first that significant Dzyaloshinskii-Moriya interaction (DMI) can be obtained in a series of Janus monolayers of manganese dichalcogenides MnXY (X,Y= S, Se, Te, X≠Y) in which the difference between X and Y on the opposite sides of Mn breaks the inversion symmetry. In particular, the DMI amplitudes of MnSeTe and MnSTe are comparable to those of state-of-the-art ferromagnet/heavy metal heterostructures. Next, by performing Monte Carlo simulations, it is found that at low temperatures the ground states of the MnSeTe and MnSTe monolayers can transform from ferromagnetic states with wormlike magnetic domains into the skyrmion states by applying an external magnetic field. At increasing temperature, the skyrmion states start fluctuating above 50 K before an evolution to a completely disordered structure at higher temperature. The present results pave the way for new device concepts utilizing chiral magnetic structures in specially designed 2D ferromagnetic materials.