MgO-based magnetic tunnel junctions (MTJs) are used in today’s hard-disk-drive read heads and a variety of magnetic field sensors for their supremely high tunneling magnetoresistance (TMR) effect. Furthermore, spin-transfer torque magnetic random-access memory (STT-MRAM) based on MTJs comprising an MgO tunnel barrier has a potential to become a leading storage technology. The building block of STT-MRAM is a cell with high TMR for good readability, high spin-transfer torque efficiency for good writability, and high magnetic anisotropy for good thermal stability and therefore memory retention. All of these requirements must be satisfied together using MTJs with perpendicular magnetic anisotropy (PMA) comprising widely employed CoFeB|MgO interfaces. However, with further downscaling of memory cell diameters the PMA provided by these interfaces becomes too weak in regards to thermal fluctuations and excessively reduces the memory retention. 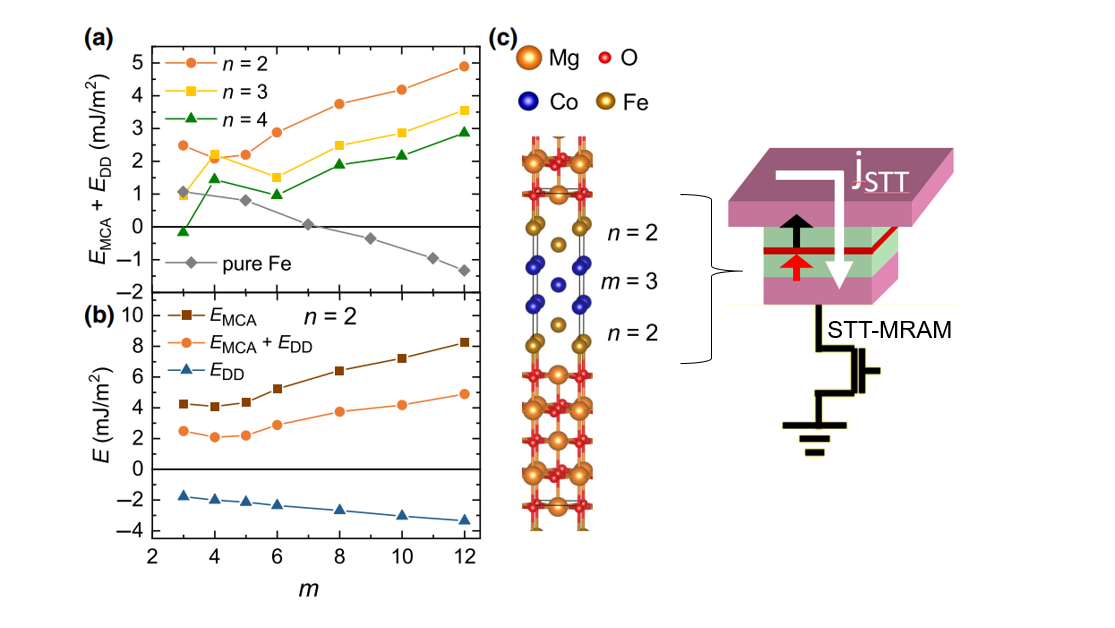 (a) Effective PMA (EMCA + EDD) in Fe(n)Co(m)Fe(n) storage layer interfaced with MgO as a function of number of monolayers n, m. The PMA in this composite layer is always maintained unlike in pure MgO|Fe|MgO (gray diamonds; its thickness is m+4 ML, the same as the overall thickness for n = 2). (b) EMCA, EDD, and the effective PMA (EMCA + EDD) for n = 2. The effective PMA increases with the Co thickness. (c) Supercell of the MgO|Fe(2)Co(3)Fe(2)|MgO with periodic boundary conditions applied in all directions. (Right panel) Schematic representation of STT-MRAM aimed by the proposed design.

In this work, we provide an alternative solution that allows boosting the PMA by introducing a bulk Co interlayer into the bulk of conventional Fe|MgO based MTJ, therefore allowing improved downsize scalability of out-of-plane magnetized MRAM. Namely, based on density-functional-theory (DFT) calculations, we propose an alternative design of MTJs comprising storage layers of the form Fe(n)Co(m)Fe(n), where n and m denote the number of monolayers. This approach allows greatly enhancing the PMA up to several mJ/m2 thanks to the combination of interfacial perpendicular anisotropy of Fe|MgO interfaces along with a strain-induced bulk PMA discovered within bcc Co. This giant enhancement dominates the demagnetizing energy when increasing the film thickness and it is required to have at least two Fe atoms at the MgO interface and three successive Co atoms in the bulk to obtain the PMA enhancement [see Figure]. Together with estimated TMR values similar to the pure Fe|MgO case and robustness against interfacial roughness, the proposed design is a promising candidate as a storage layer for STT-MRAM cells with highly improved thermal stability compared to conventional STT-MRAM.