We have recently reported that pure spin conductors could behave as nonlinear component in the high power regime, hereby opening up considerably the realm of functions realizable with magnetic materials. An additional feature is that these are continuously tunable by an external magnetic field.

The recent demonstrations that spin-orbit torques (SOTs) allow one to generate and detect pure spin currents transfers to an adjacent layer has radically changed our grasp about material compatibility with spintronics. In particular, it has triggered a renewed interest in magnetic insulators, which are much better spin conductors than metals. A large effort has concentrated so far on yttrium iron garnet (YIG), which is famous for having the lowest known magnetic damping parameter. The typical experiment is a non-local transport measurement between two parallel Pt wires deposited on top of YIG as illustrated in FIG.1.

In a recent joint paper publication, we have reported measurement of the non-local spin conductance of YIG films when the driving current is varied in a wide magnitude range creating, first, a quasi-equilibrium transport regime and, then, driving the system to a strongly out-of-equilibrium state. The lateral device is biased by an in-plane magnetic field set at a variable azimuthal angle φ. We sort the nonlocal voltages according to their symmetry with respect to the magnetization direction. At low current, the spin transfer signal, Σ0, follows first a linear behavior which is believed to be dominated by thermal magnons’ transport. The interesting novel feature is the fact that the signal, Σ0, deviates from a purely linear transport behavior at large current above, Ic. Quite remarkably the deviation from the linear conductance occurs very gradually and approximately follows a quadratic behavior (see insert). We have also found that at high current, the spin conductance is dominated by magnetostatic magnons, which are low-damping non-equilibrium magnons thermalized near the spectral bottom by magnon-magnon interaction, with consequent a sensitivity to the applied magnetic field. These findings are not only important from the fundamental point of view, but might be also useful for future applications. Although transport of thermal magnons is difficult to control due to their relatively high energies, the crossover to a subthermal spin conduction regime allows the development of controllable spin conductors by relatively weak magnetic fields. From a fundamental point of view, these studies of magnon transport in YIG by means of the direct and inverse spin Hall effects are also very interesting as they provide new means to alter strongly the energy distribution of magnons up to thermal energies, where the interplay between these nonequilibrium populations is expected to lead to new collective quantum phenomena at room temperature. 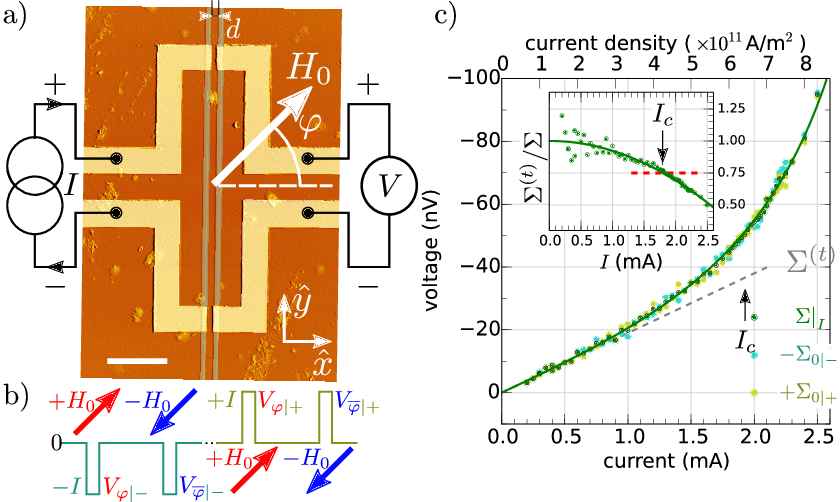 Figure 1: a) Top view of a lateral device. Two Pt wires (grey lines) are aligned along the y-direction and placed at a distancem apart on top of a 18~nm thick YIG film. The non-local conductance (injector-detector) is measured using current pulses while rotating the magnetic field in-plane.