MRAM is a type of nonvolatile memory that stores the binary information through the magnetic configuration of its main building block: the Magnetic Tunnel Junction (MTJ). In the last decade, the use of perpendicular anisotropy existing at the tunnel barrier interface, allowed to improve MRAM manufacturability. However, the thermal sensitivity of the interfacial anisotropy is a limitation for MRAM applications having to operate over a wide range of temperatures such as automotive application. How can the operating temperature range of MTJs be enlarged?

The conventional stack used in perpendicular MRAM uses CoFeB electrodes and MgO tunnel barrier. The thickness of the magnetic storage layer is typically between 1.4 and 2.5 nm. In such a stack, the magnetization remains perpendicular to the layers thanks to an interfacial Perpendicular Magnetic Anisotropy (iPMA) which exists at the MgO/CoFeB interface and stabilizes the storage layer magnetization. The magnitude of the iPMA is important since it is directly related to the memory retention time (i.e. how much time the memory can keep the stored information). However, the temperature sensitivity of the interfacial anisotropy is a limitation when trying to use this type of memory in applications requiring a wide range of operating temperatures. This is the case in automotive applications which may operate between -40°C up to +150°C as well as during chip soldering in system on chip fabrication (260°C for 1 minute). To solve this problem, Spintec researchers proposed a new concept of MTJ based on Perpendicular Shape Anisotropy (PSA). In this concept, the thickness of the storage layer is increased so that its shape becomes a cylinder instead of a disk. This results in MRAM cells with a 20 to 30nm thick storage layers and diameters ranging from 10 to 20nm. This geometry results in a natural perpendicular anisotropy arising from the shape, which adds to the iPMA and reinforces the effective perpendicular anisotropy of the cell. Researchers at Spintec studied the evolution of the storage layer coercive field (measure of its magnetic stability) over a wide range of temperature from 10 K to 380K, and compared it with conventional MRAM based on iPMA. As PSA arises from the bulk material magnetic properties of the storage layer, its temperature dependence is much weaker than that of the iPMA in conventional MRAM which comprise very thin storage layer. In addition, the team demonstrated that despite the large thickness of the storage layer, PSA MRAM can still be written by electrical current pulse as conventional MRAM. The low or high resistance state is set by the current polarity through an effect called spin transfer torque. The weak temperature dependence of the magnetic and transport properties of PSA MRAM opens the route towards a variety of applications requiring a wide range of operating temperature (automotive, industrial, spatial…). 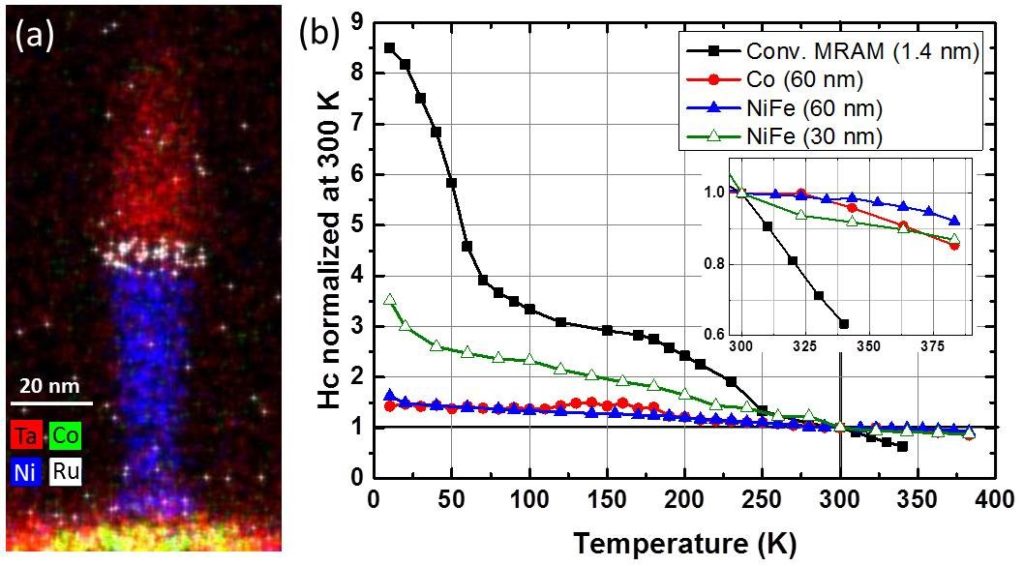