Spintronic memristor based on an isotropically coercive magnetic layer

We propose an original concept of spintronic memristor based on the angular variation of the tunnel magnetoresistance (TMR) of a nanopillar comprising several magnetic layers. We have experimentally developed the appropriate magnetic free layer and integrated it in a full nanosized magnetic tunnel junction pillar. In parallel, we developed a model describing the magnetization dynamics of this free layer under pulses of current with an additional dry friction dissipative term. The simulations confirm the memristive behavior of such device able to operate as a synapse for neuromorphic computing. 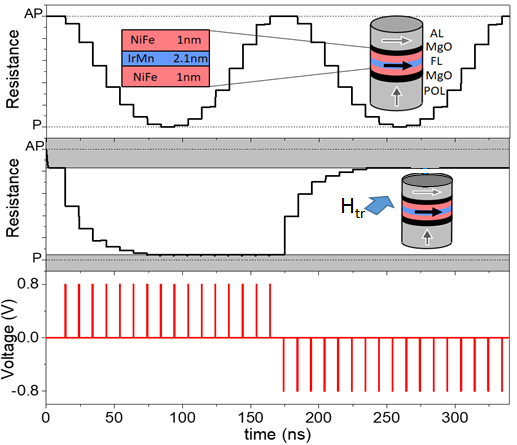 Resistance variation without (top panel) and with (middle panel) transverse in-plane field (Htr) under a train of current pulses (bottom panel). Insets : schematics of the device and of the composite free layer.

Our goal is to develop a compact device able to reach multiple resistance states upon injecting nanosecond pulses of current and thus mimicking a synaptic function for neuromorphic circuits. The device is based on an in-plane magnetized magnetic tunnel junction composed of an analyzer layer (AL) with static magnetization and a free layer (FL). The key feature consists of stabilizing the FL’s magnetization at different in-plane angles with respect to the AL’s magnetization direction, enabling thus to sweep progressively the resistance between its minimum and maximum value thanks to the TMR effect. We have experimentally implemented and demonstrated this concept with a composite FL having an antiferromagnetic layer (IrMn) inserted between two thin NiFe layer (see inset of the Figure). The thickness of the antiferromagnet has been adjusted to get a negligible exchange bias (the hysteresis loops are centered on zero field) and a fairly large coercive field. This composite layer is experimentally exhibiting the desired in-plane isotropic properties relying on the spin frustration phenomena at the ferromagnet/antifferomagnet interfaces. To describe these experimental results, we have built a model based on the Landau-Lifshitz-Gilbert (LLG) equation by adding an additional dry friction term (by analogy to mechanics). The main effect of this term is to change the static equilibrium condition, enabling the magnetization to be stabilized in any in-plane direction at zero field. Under a large enough rotating field, the magnetization rotates behind the field with a certain drag angle. This was experimentally characterized by planar Hall effect measurements and confirmed by simulations. To control the state of free layer in an actual memristive device, spin transfer torque (STT) can be advantageously used. For this purpose, a second magnetic junction is placed at the bottom of the device serving as perpendicular spin polarizer (POL). In such configuration, the out-of-plane polarized spin-current induces a precessional motion of the FL magnetization. If the duration of the injected current pulses is equal to a fraction of the precession period, then the magnetization rotates step by step in the plane of the layer, clockwise or anticlockwise depending on the current polarity. The application of a transverse field allows to limit this angular rotation between 0° and 180° which is required to achieve a monotonous variation of resistance for each current pulse polarity. These combined experimental and numerical results are essential for the development of future synaptic-like memristor compact devices.