Neuromorphic computing is a bio-inspired technology which aims at mimicking the brain working principles. It can be used for fast and energy-efficient applications through the implementation of networks of artificial neurons and synapses. Artificial synapses are implemented as electronic components called memristors. These are non-volatile memory devices whose resistance can take several intermediate values between minimum and maximum, the resistance varying monotonously as a function of the polarity of the current pulses flowing through the device. In the present study, a novel concept of spintronic memristor was proposed which takes advantage of the know-how acquired at SPINTEC in the development of magnetic memory (MRAM) and radiofrequency nano-oscillators. 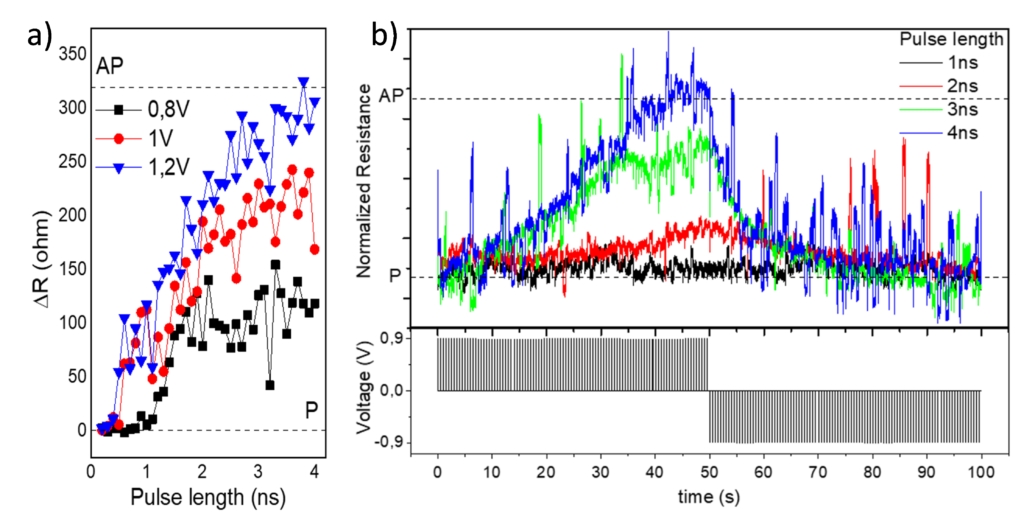 Electrical characterization of the device memristive behavior: (a) Change of resistance of the magnetic tunnel junction as a function of voltage pulse duration for different pulse amplitudes; (b) Evolution of the device resistance when submitted to a train of positive voltage pulses followed by a train of negative ones. The average resistance drifts up with positive pulses and down for negative pulses. The superposed noise is due to thermal fluctuations of the storage layer magnetization.

This novel memristor consists of a magnetic tunnel junction as that used in MRAM cells. We remind that a magnetic tunnel junction is formed of two magnetic layers separated by a tunnel barrier. One of the layer called the reference layer has a fixed magnetization while the magnetization of the other (the storage layer) can be switched or rotated. When a current flows throughout this device, its resistance depends of the relative orientation of the magnetization in the two magnetic electrodes, a phenomenon named tunnel magnetoresistance. Two important modifications have been brought to the junction to change its functionality from MRAM cell to memristor. First, while MRAM encodes the information in a binary form (“0” and “1”) corresponding to two magnetic configurations (minimum resistance-parallel or maximum resistance-antiparallel), this memristor is designed to reach a large number of intermediate values of resistance. To achieve this, we exploited the cosine variation of tunnel conductance as a function of the angle between storage layer and reference layer magnetizations. A special storage layer based on ferromagnetic/antiferromagnetic coupled layers was developed exhibiting an isotropic coercivity thus allowing to stabilize the storage layer magnetization in any in-plane direction. Second, a necessary condition is to rotate the storage layer magnetization step by step clockwise or anticlockwise depending on the voltage pulse polarities while limiting the angular excursion between 0 and 180°. Based on our earlier work on spin transfer radiofrequency oscillators, we demonstrated that this can be achieved by adding to the junction an additional layer with out-of-plane magnetization and adjusting the spin-transfer influences from this additional layer and from the reference layer. The resulting device exhibits memristive functionality as illustrated in the Figure.